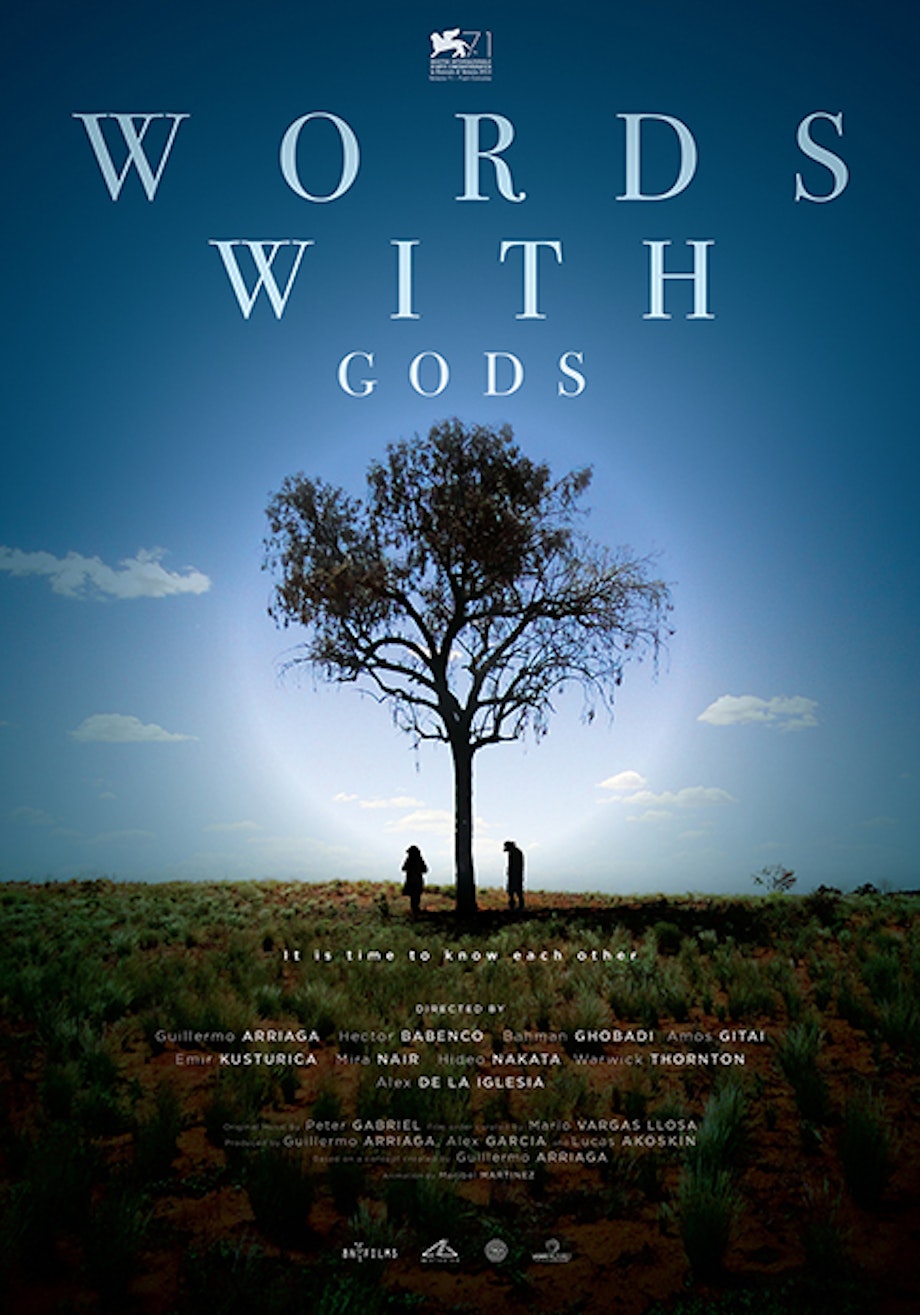 "The masterpiece of possibilities that is Words with Gods, proved without a doubt that cinema is my religion." - E. Nina Rothe, The Huffington Post

Words with Gods features nine powerful stories of faith, created by some of the world's most celebrated filmmakers. A dramatic spectrum of beliefs are represented, with each filmmaker speaking about the one closest to the culture they depict in their story: Warwick Thornton deals with Aboriginal Spirituality, Hector Babenco with Umbanda, Mira Nair with Hinduism, Hideo Nakata with Shinto Buddhism, Amos Gitai with Judaism, ílex de la Iglesia with Catholicism, Emir Kusturica with Orthodox Christianity, Bahman Ghobadi with Islam and Guillermo Arriaga with Atheism. The film is a panoramic global story that confronts birth and death, fateful choices and faith lost and found.

Words with Gods tells the story of a global cast of characters, from nine different cultures. It is a dialogue of nine cultures reflected in stories where faith and traditions are present. Aboriginal Spirituality, Umbanda, Hinduism, Shinto Buddhism, Judaism, Catholicism, Orthodox Christianity, Islam and Atheism, are represented through the visions of nine of the world’s most revered directors.

Warwick Thornton opens with his short film True Gods. Set against a backdrop of the Australian wilderness, it is an animistic meditation on the relationship between motherhood, the earth, ancestry and spirit.

Héctor Babenco’s, The Man Who Stole a Duck is the story of an abusive husband whose life falls into disarray after the breakdown of his young family. Unable to cope, destitute and stunned, he spends his days drifting around the streets of São Paulo in search of solace.

In God Room, Mira Nair tells the story of a wealthy family going over the final plans for the construction of their luxury apartment in Mumbai. The family members argue over the allocation of rooms in the house and crucially where God's room should be placed.

Hideo Nakata’s Sufferings is a tale of loss, sorrow and acceptance. A Japanese fisherman loses all his family in the 2011 tsunami. Trying to come to terms with his grief, he questions his life purpose in an encounter with a Shinto Buddhist monk.

In Book of Amos, director Amos Gitai vividly contrasts Israel’s contemporary political moment and its mythical past. Soldiers and civilians fight against one another, oblivious to a group who are reciting prophetic passages from the Hebrew Bible.

Álex de la Iglesia’s The Confession tells of the misadventures of an assassin who encounters a taxi driver, who is a devout Catholic and mistakes the dark clad assassin for a priest, shifting his fate in an expected direction.

In Our Life, Emir Kusturica depicts a day in the life of a Christian Orthodox priest in the remote and mountainous Serbian landscape. He puts himself through sacrifice during an unconventional spiritual journey.

Bahman Ghobadi's Sometimes Look Up is a tragicomic tale of lust and faith, where two brothers must come to terms with their divergent personalities and approaches to life and faith.

Guillermo Arriaga’s closing film God’s Blood is the story of a middle-aged mining engineer, whose elderly father seems to be having dreams about god. Being an atheist he dismisses his father’s feelings as the result of stress or senility, with unforeseen consequences.

With animations by Maribel Martinez and a soundtrack by Peter Gabriel, the film’s nine episodes – arranged in order by Mario Vargas Llosa – present a radical international perspective on the diversity, commonality and significance of beliefs in our lives as human beings.